Random Images
I've explained every random image that appears at the bottom of the home page here. > back

This is just an mspaint image I drew for no reason. There's supposed to be a tree, cloud, and flower in it, though I distorted the colors and scaled everything down so it's hard to tell.

This is a review I found on Newgrounds that I thought was funny. I'm pretty sure this was left on an eddsworld episode. The screenshot was taken sometime in July 2020, when NG turned pink for some reason.

This is Benson from Regular Show with a gun, from a piemations animation. I used to think that this was an actual outtake from the show... 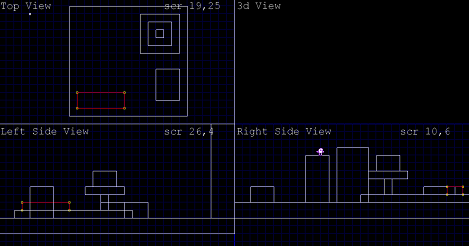 A screenshot of the brogworld editor from Bienvenido: the game lol, a very early version of it btw. A picture of the map being worked on is one of the other random images here.

This chick timer used to show up every time I looked up "timer" on duckduckgo. I like it.

A screenshot of celestia, which was a game I added to the site after I put this image up.

A screenshot of the map being worked on in the brogworld editor image above. This was made when I was still planning on Bienvenido being Brog3D, a game I never got around to making.

This is Neb from the game LN, which I haven't released. This particular sprite was used as a custom character for IWBTB (I wanna be the boshy). They're probably one of my first OCs.

A portal from Diablo II, I think this gif was taken from Bienvenido's source files.

This is a gif of a skeleton character design I came up with for a game that never came out called GMcore.

This is a screenshot of my spacemy account before spacemy was taken down. I remember a few of my account details, my age was 3, my username was "catalystl", my pfp was hlcomic freeman with a css spinning animation, and my profile music was Hydroelectric Viking by Lemon Demon. 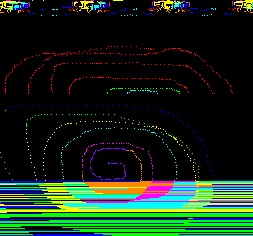 A screenshot of a drawing of Neb I made in N-Mapper that was caused by a bug in the width changing function, placed on top of another glitched N-Mapper image. 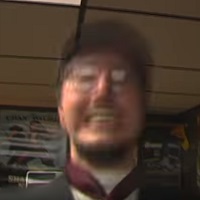 A screenshot of the Nostalgia Critic mid-falling over. I think this was from the video where he fights the AVGN. I took this a long time ago.

A minecraft skin of the character Pippin which was going to be used in a game called IceVain that I didn't finsh.

A cropped section of the back album art I made for the midi album I started working on in 2020. The text shown is part of the tracklist, and I think that one of the song names that got cut off here was "this song doesn't exist".

A gif of a cow from Diablo.

A gif of BK, which was a character I used in a comic I made. They also show up on the N-Mapper page.

An image of Ninten from MOTHER/Earthbound Beginnings that I distorted and added flames to. The sprite of him smiling came from the English translation of the game, though that version adds a white stripe to his shirt that wasn't present in the Japanese version. I edited his shirt in this image to resemble the Japanese version, though this kind of sprite never existed in that game's data.

A screenshot of an old version of LN I made in late 2018. Neb is using a double jump and leaving a red trail here, though you'll notice that the red sprites don't face the same way he does because I was too dumb to know how to fix that before. The scythe sprite is the end of the level, I don't know why I made it a scythe, I guess I just thought it looked cool.

A screenshot of text from LISA: The Painful RPG that pops up when you interact with the rock in the picture, which keeps you from falling off of the cliff to your death. 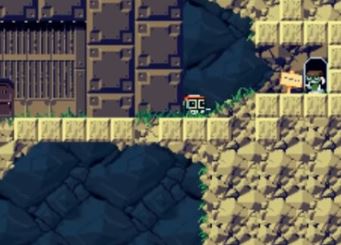 A screenshot of Cave Story taken from a stream I did in 2019. I modified the player's sprite to be Neb in this. 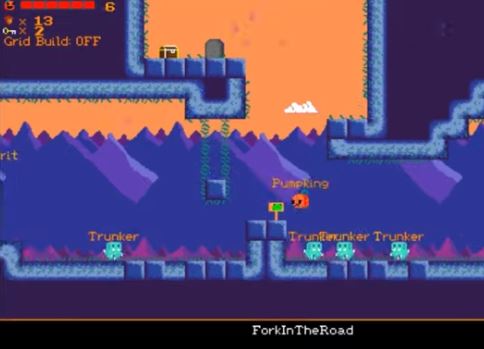 A screenshot of Pumpking's Revenge, a game I made in 2019 that was never finished. I got pretty far into development though, if you want to check it out you can find it on the Catpage Archive. This was taken from another stream I did. 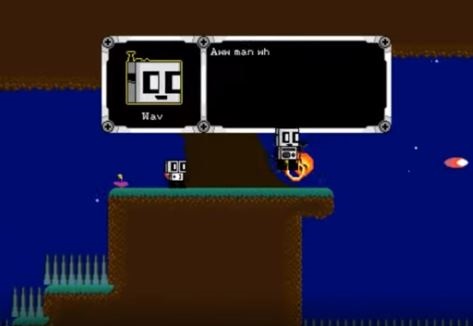 A screenshot of LN, where you (Neb) have the option to shoot and kill this robot called Wav, who talks after he dies. 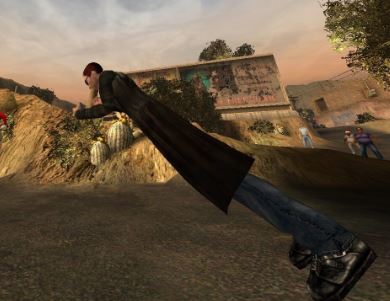 A screenshot of Postal 2, where I'm standing on a keyboard in the ground that tilted me at a weird angle I thought was funny.

An image I made from this screensaver from December 2020. I took a screenshot of the visualization and saved it as a bitmap which lowered the amount of colors in it, then copied and pasted the border of it to make it look weird.