Old comic archive
Here's some comics I made in 3rd grade

...well ok it's really just one comic series and a some other 1 page long things.

I found these some time before 8.12.2020 (a little before this website got made)
I made some mario 64 comic that surrounded my experiences with the game and that inspired hlcomic. It's pretty neat to look at I think.


other comics
I wish I found more of these. Unfortunately, I don't think I will.

I remember making a comic about some sentient flower that lived in a castle and people would try to go kill him except he would set invisible death traps around himself so it was impossible.


for some reason
a lot of my older comics that must have slipped into some alternate dimension at some point between when I made then and now had some character named greg in them. That name probably comes from greg in diary of a wimpy kid lmao. 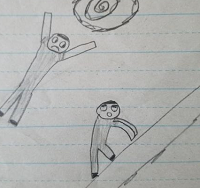 Most of the comics I made featuring him were made when I was in 2nd grade.
Don't ask why there are 2 of him in this drawing.